A. Fox - "Julian and his team were very professional throughout. There was great attention to detail which resulted in a high quality finish that was impossible to fault." 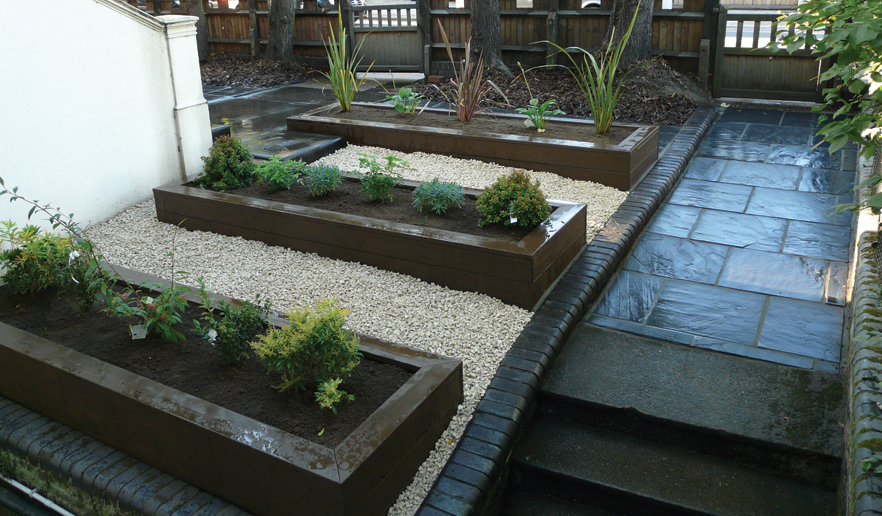 Julian and his team were very professional throughout. There was great attention to detail which resulted in a high quality finish that was impossible to fault. I would happily recommend them to anyone.

This was a really enjoyable project to work on and as can be seen by the “before” photographs, has completely transformed the front of this large town house in Wandsworth. The two pathways running to the left and right sides of the front pathway of this double fronted building were made from concrete crazy paving, which was all beginning to lift due to the roots of the lime trees at the front of the property. The access pathway to the basement flat on the left side of the front garden was laid in tarmac and also starting to break up. The communal area for the dustbins was nothing more than a couple of posts in the ground to indicate where the bins should be placed and as a result was quite a mess, continually having rubbish thrown into it by passing pedestrians.

The basic brief was to unify all of the pathways in a manner that would be sympathetic to the building, to solve the problem of the communal refuse area and to create a planting structure over the asymmetric spaces available in the garden.

We decided to use a natural black slate paving for the pathways, which would complement the black coping stones on the walls and the black slate roof tiles. Large planters were constructed from smooth profile redwood decking boards on either side of the front pathways, with a further two planters stepping down the terraced slope on the left hand garden towards the entrance to the basement flat. We constructed a large bin store at the end of the right hand pathway from marine ply. By moving the bins away from the front fence, we eradicated the problem of people throwing their rubbish onto the bins, and also covered the right hand boundary fence, which was not particularly nice. The bin stores and the planters where stained so that all of the woodwork was the same colour.

The clients opted for a contrasting Spanish White stone chipping surface between the planters and provided plants for the planters, which we installed following the topsoil. Finally, we raised the crowns of the lime trees to let more light into the north facing garden, removed all of the suckers around the base of the trunks and put down a bark mulch to tidy the area under the trees.

The final result is quite a transformation from what we found on our initial survey and our clients were extremely happy with the finish.