With the summer sunshine glistening on the white limestone and all of the plants in their full summer foliage, the garden looked stunning.

We began to construct this garden just over a year ago, finishing at the beginning of December 2011. A time of year not normally perceived as ideal for such a major project, particularly when taking into account the vast amount of groundwork and excavation involved. Rain is your biggest enemy under such circumstances, but the gods smiled upon us. It was the driest autumn for decades and even once the night time temperatures had dropped to minus double figures come December, by 9.00am each morning, we were basking in the unusually warm winter sunshine and working in t-shirts until the sun sank below the russet beech hedge line.

Troublesome weather conditions aside, in many respects this time of year can be an ideal time for major works. Recreational use of the garden from its summertime peak has fallen to virtually nothing, enabling us to come in and transform our clients’ gardens with the least interruption to their domestic or social lives.

However, the one single drawback at this time of year is the fact that we will not be able to complete all of the planting and therefore, the final look of the garden until the spring, when the full range of plants are available from our suppliers again. Whilst our clients appreciate this situation as well as I do, signing off a project with blank spaces in some of the planting areas does make me a bit frustrated, as I just won’t feel satisfied until the garden is 100% complete.

Whilst all of the hard landscaping was completed and the final structure was realised, as far as the planting was concerned, we were only able to install the trees and architectural evergreens. The colour scheme was always going to be a monochromatic affair, using only white flowering plants with the many evergreens, but the areas where the Arum Lilies and Iris were to be positioned would be completely bare for winter. 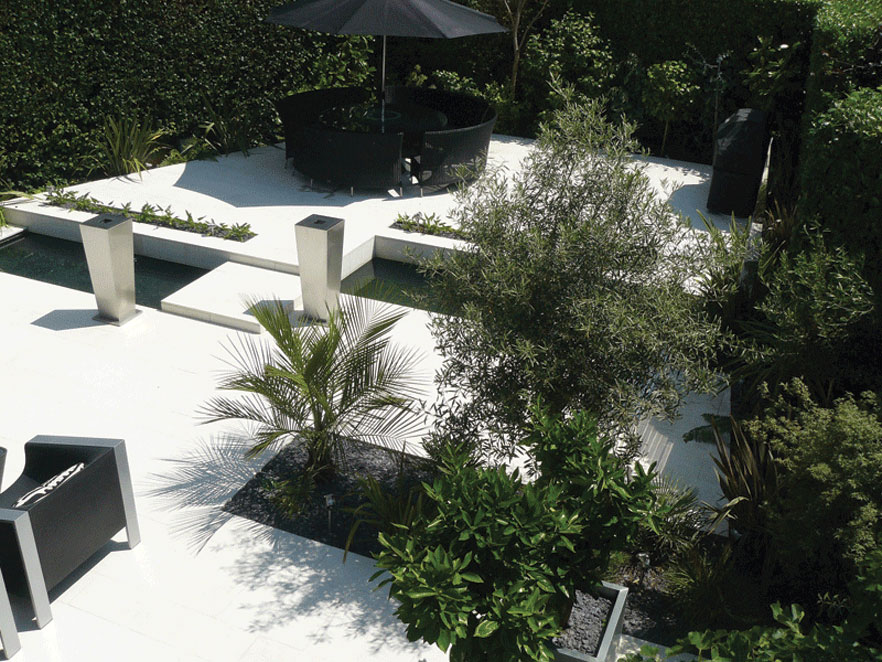 We resolved some of the problem by positioning the dwarf fan palms (Chamaerops Humilis), in the beds above the ponds where the lilies should have been, rather than the lower beds as planned. By keeping them in their pots and mulching over the top, they could then easily be moved in the spring and this at least meant there were no major blank spots through the winter. Thankfully, the white Camellias planted around the upper terrace were just coming into flower and so things actually looked pretty good, despite my usual worries.

We returned at the end of March and moved the palms to the lower beds, replacing them with the beautiful Zantedeschia Lilies. With the Snow Queen variety of Iris densely placed around the wings of the reflection ponds, the planting was finally complete. But it would still be a few months until the garden had fully rejuvenated from the winter and so we left things to settle in and decided to return during the summer for a final look.

With the summer sunshine glistening on the white limestone and all of the plants in their full summer foliage, the garden looked stunning. The beech hedges had turned lime green, the fronds of the tree ferns were full and arching, the lilies had really bulked up and the iris look perfect by the ponds. The ponds sound as beautiful as they did in the winter, but now they gently shimmer with inverted flowers. The combination of the new growth and the many white flowers in bud has gone a long way to soften the hard lines in the geometry of the garden, particularly around the ponds and steps. The addition of the chrome sculptures and stainless steel torches has added just the right amount of interest and drama to what is essentially a very minimal pallet, resulting in a thoroughly contemporary and very peaceful look.

However, it is the human touches and influences here that play just as an important part as the plants in bringing this garden to life. Seeing cushions out on the chairs and drinks on the table highlights the importance in the pleasure of its usage, as well as in its structure and design. It is this emotional feeling that ultimately really connects the interior living space with the exterior and consequently our clients with their new garden.

Now (at last) I can relax, safe in the knowledge that not only has the planting come to fruition, but also in the fact that the garden is used and fully enjoyed.

For more pictures of this garden design, please visit Our Facebook Page: