This is the second stage of our current garden design project in Queens Park, London, NW6.

In our previous blog, I dealt with the basic garden design concept and the construction of the raised pavement, which defined and dictated the build of this garden. Now in phase two, we will install the feature wall and water feature with the built-in planter, followed by three areas of Ipe decking and additional Ipe fencing.

Directly opposite the central doors and steps leading from the lounge extension, we have built a feature wall. This was constructed from nine inch blocks and then covered with the same 900mm x 600mm travertine paving. A stainless steel water blade has been positioned into the centre of the wall, which will cascade into the collection pool underneath.

Immediately in front of the collection pool, there is a planter space of the same dimensions, where white Zantedeschia lilies will be planted in the Spring. The wall, along with the water blade and planter, will become the focal point for the main area of this garden. The cascade will provide an aural texture, whilst the cream travertine will beautifully frame the large green leaves and white and yellow flowers. 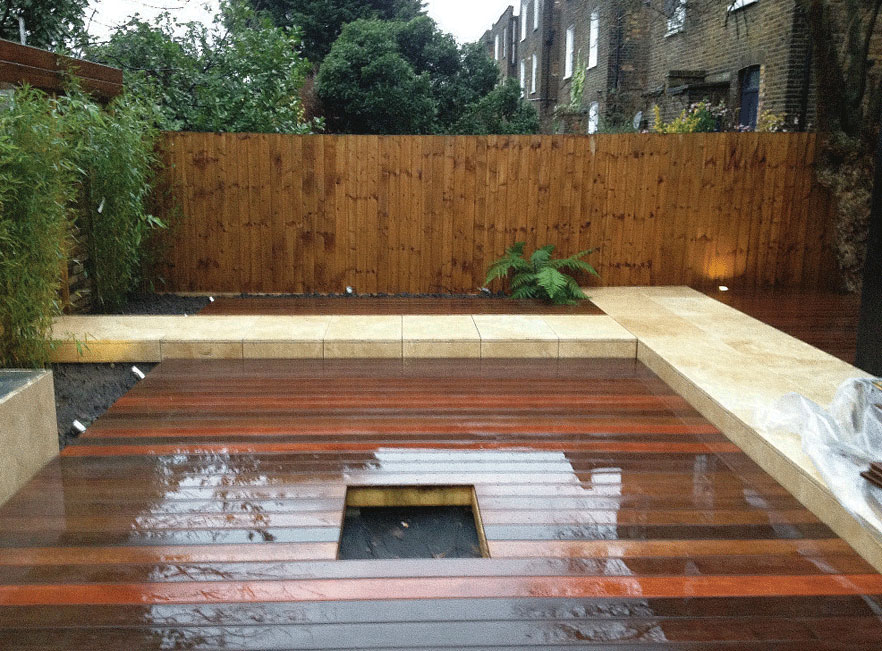 There are three areas of decking in this design: a large informal sunken area positioned centrally in between the lounge extension and the rear boundary, a narrow deck for a sun lounger adjacent to and at the same level as the raised pavement, right next to the right hand planting bed, and finally, a dining area next to the right hand access steps to the lounge extension.

The decking has been fitted to the usual softwood framework; however it has been secured to the framework using a hidden clip system. This means there are no screws through the face of the timber, giving a clean elegant finish, whilst negating the risk of dirt and algae collecting around the screw heads. A cut out has been left in the middle of the main deck, where a piece of the travertine will be inserted to create a base for a fire pit.

The same Ipe decking boards have been used to cover the brick wall at the back of the garden, on either side of the feature wall. They have been secured horizontally to vertical softwood timbers with the same clip system as before. A gate has been installed to provide access to the storage area behind the wall.

A second temporary Ipe fence has been constructed across the smaller left side return. This area will be developed later in the year. Whilst it may seem extravagant to use hardwood for a temporary fence, the boards will be re-used to create a raised decking area immediately outside the kitchen, which is accessed by the side return. This raised deck will eventually be linked to the travertine pavement, with a 600mm wide pontoon deck and prairie grass planting on either side. 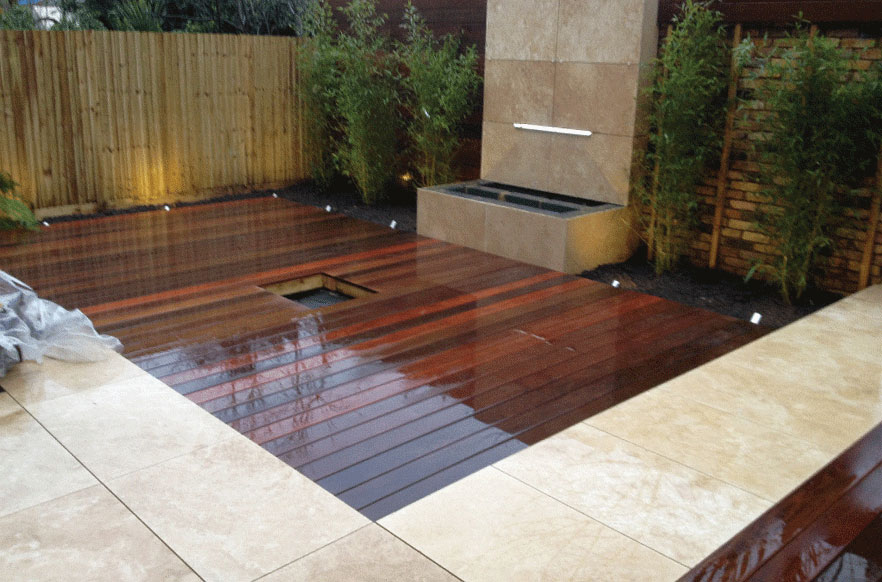 You can see from the pictures that the decking and fencing installation, combined with the alternating areas of travertine and Ipe set at different levels, revealed both the geometry and structure of the garden.

Next time, we shall install the new access steps to the lounge extension, the large terraced area of paving along the side return, the remote controlled lighting system and the main evergreen planting.

Keep following our blog for the next and final phase of this contemporary garden design project.