A Garden in Streatham, SW16 London

V. Ballard - "I would highly recommend Julian and his team as reliable, honest, skilful, hardworking and very reasonably priced." 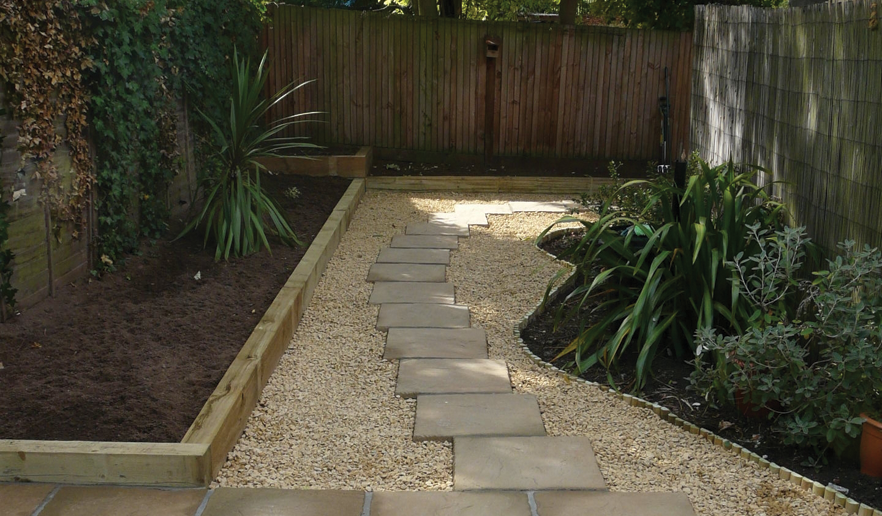 My garden was quite a large and unruly place, full of brambles and nettles and had become so overwhelming that it had been barely touched for years. Once I got Julian on board everything changed! After he came to see the garden he sent me a detailed quote almost immediately and once he started the garden with his assistant Rob I began to see a fantastic transformation evolving. They were creative, hardworking, charming to deal with throughout the whole process and created for me a beautiful garden, including a terrace, pathway, raised beds and even uprooted a tree. I would highly recommend Julian and his team as reliable, honest, skilful, hardworking and very reasonably priced.

This project shows exactly how much can be achieved with a fairly conservative budget and a bit of thought. The two clients who shared this unusual L shaped garden had not used it because they were unhappy with its lay out.

They wanted an area of paving where they could have a table and chairs, and they needed to have some raised beds, as the woodland nature of the space meant that they continually had natural species invading any ground level planting. With raised beds you can seal the ground with weed sheeting and then add new topsoil to prevent dormant plant and weeds from germinating. The new railway sleepers were a good way of quickly raising beds without too much labour costs being added to the project. We had to make sure that they were not warped or twisted as this could cause endless problems when trying to create vertical edges and nice straight lines.

We used a composite paving, which mimics natural Cotswold paving to create a paved area and then laid a meandering curved pathway, which leads the eye around the corner of the L, where it ends at a bench under a large tree. Cotswold stone chippings were then laid and compacted on either side of the pathway to provide an affordable surface for the majority of the ground.
The clients wished to install the planting themselves, which at the time these photographs were taken had not yet been completed. It is important to remember that sometimes things have to be done in stages, in order to achieve what would otherwise be unaffordable for a client if carried out in one hit.