W. Hancock - "Abstract Landscapes did an excellent job transforming my rambling and overgrown Victorian garden into a functional, contemporary space." 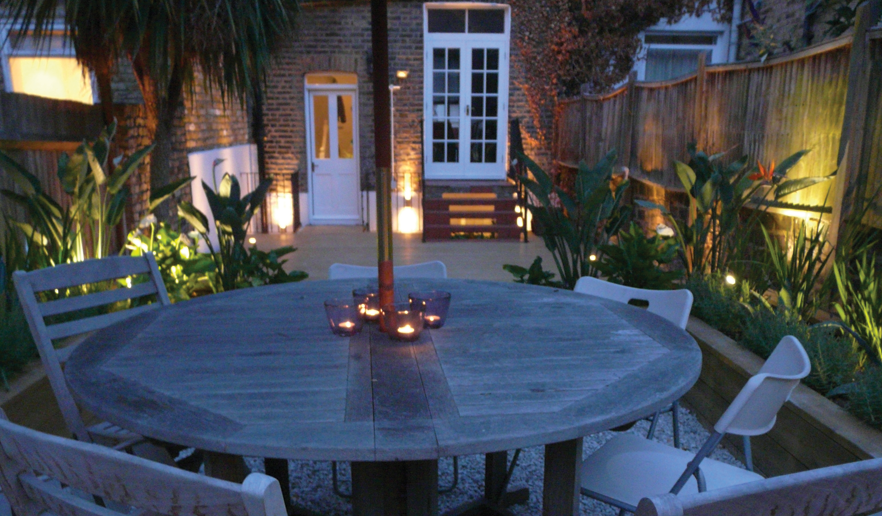 Abstract Landscapes did an excellent job transforming my rambling and overgrown Victorian garden into a functional, contemporary space; installing planters, decking, lighting, stone, a bespoke fence and planting scheme. The project was well managed from start to finish, and stayed within budget. Julian’s attention to detail ensured a well thought out design that I am extremely happy with, the lighting being a particular triumph. He also went “well beyond the call”, spending lots of time researching flower and plant varieties, as well as materials options that have ultimately enhanced his original design. I would highly recommend Abstract Landscapes to anyone considering developing their outside space.

This garden was another very enjoyable project for the team and myself. The client wished to create two distinct areas in the new garden; an area of decking to lead out from the house which would make a sheltered sun terrace in this south facing garden and then a barbecue and dining area which would be surrounded by planting.

There was an existing fence at the back of the garden that was falling apart, which in turn covered a brick wall, which was also in need of repair. Unfortunately, this wall was shared by two other neighbouring gardens both of which were being let, with neither respective landlords’ wishing to get involved in the rebuilding process. Because of this, the client decided that we should build a new fence just inside his boundary.

Having decided to build two large planters from softwood decking boards, which would divide the two distinct halves of the garden and surround the dining area with plants, we built a six foot high, Venetian style fence across the rear boundary from 5cm wide, planed softwood batons and 10cm wide posts to tie everything in.

The decking was constructed directly on top of the old paving, which is one of its natural advantages, as it easily covers uneven surfaces, with the boards running from left to right to make the garden feel wider. We set walk over decking lights along the left and right hand edge of the decking to up-light the walls and fences on either side, which would in turn create reflected lighting for the decking area itself.

We planted lots of Birds of Paradise and Zantedeschia Lilys in the front of the planters to provide a lush tropical entrance to the dining area and continued the theme with Phormiums, Agaves, Crocosmias and Iris, with a selection of Lavenders to provide a lovely scent when sat at the table. We placed several Jasmines at the back of the planters so that in time they would spread across the new fence.

The final result has made a really enjoyable space, with the dining area surrounded by the plants being particularly successful. The use of spotlights illuminating the planting and brickwork on the rear façade of the house has been the icing on the cake, making what is a fantastic garden by day, especially magical at night.